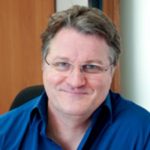 
Prof Hollenberg is the Thomas Baker Chair, and a past ARC Laureate Fellow, at the University of Melbourne. He completed his PhD in theoretical particle physics at the University of Melbourne in 1989 and was subsequently awarded a JSPS Fellowship at the KEK accelerator laboratory in Tsukuba, Japan. After his postdoctoral period he returned to the School of Physics to take up a research and teaching position. Lloyd’s early work in mathematical physics and lattice gauge theory was a natural starting point for his interest in quantum computing. Since 2001, Lloyd has been a driving force for the silicon quantum computer vision. He is an internationally-known proponent of quantum technology having made contributions in both theoretical quantum computing and experimental implementations of quantum sensing using spin qubits in semiconductors that crosses the nano-bio divide.