For the final stage of the @Home competition, the top 2 teams were selected in each of the sub-leagues (domestic, social and open platforms) to perform demos inside a 10 minute window followed by 5 minutes of questions from the judges. The scoring judges were comprised by trustee board members, external judges and members of the technical and organizing committees.

Chile showed an episodic memory demo based on their ongoing research, while UTS showed pepper as a social robot interacting with the “owner of the house” navigating environments and searching the house for the owner’s daughter.

Tidyboy did a demo about a manipulation task where the robot opened a cabinet door to get a juice, and then a snack from the kitchen table. It then placed both in a wheeled cart that it grabbed and took to the livingroom for a house guest.

TUe first showed how the robot understands pointing at objects in the room related to their research on human behavior recognition. Afterwards, they did a party demo where the robot recognized people in the livingroom and interfaced with a periscope app on a phone to get people’s drink orders. The robot then proceeded to navigate to the fridge, pushing a cart, to bring back multiple drinks at once and asked help from a bartender to get drinks from the fridge

Open Platform League
Pumas (2nd place) and Homer (1st place)
Pumas’ demo included both their robots from OPL and DSPL and showed how the robots can collaborate with tasks using cloud services like Alexa in social tasks like the robot party host.

As part of Homer’s final demo, they showed links to their ongoing research using their two open-platform robots about autonomous mapping, and adaptive learning from demonstration. As their last task of the demo they showcased the robot cleaning the toilet as part of a manipulation task that involves the use of contact forces. 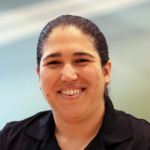 Maru Cabrera is Research Associate at University of Washington.

Maru Cabrera is Research Associate at University of Washington.