Hot papers on arXiv from the past month – January 2020 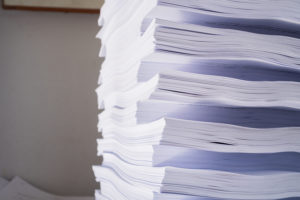 What’s hot on arXiv? Here are the most tweeted papers that were uploaded onto arXiv during January 2020.

Abstract: We present Meena, a multi-turn open-domain chatbot trained end-to-end on data mined and filtered from public domain social media conversations. This 2.6B parameter neural network is trained to minimize perplexity, an automatic metric that we compare against human judgement of multi-turn conversation quality. To capture this judgement, we propose a human evaluation metric called Sensibleness and Specificity Average (SSA), which captures key elements of good conversation. Interestingly, our experiments show strong correlation between perplexity and SSA. The fact that the best perplexity end-to-end trained Meena scores high on SSA (72% on multi-turn evaluation) suggests that a human-level SSA of 86% is potentially within reach if we can better optimize perplexity. Additionally, the full version of Meena (with a filtering mechanism and tuned decoding) scores 79% SSA, 23% higher than the next highest scoring chatbot that we evaluated.

Abstract: How does a 110-layer ResNet learn a high-complexity classifier using relatively few training examples and short training time? We present a theory towards explaining this in terms of hierarchical learning. We refer hierarchical learning as the learner learns to represent a complicated target function by decomposing it into a sequence of simpler functions to reduce sample and time complexity. This paper formally analyzes how multi-layer neural networks can perform such hierarchical learning efficiently and automatically simply by applying stochastic gradient descent (SGD). On the conceptual side, we present, to the best of our knowledge, the FIRST theory result indicating how very deep neural networks can still be sample and time efficient on certain hierarchical learning tasks, when NO KNOWN non-hierarchical algorithms (such as kernel method, linear regression over feature mappings, tensor decomposition, sparse coding) are efficient. We establish a new principle called “backward feature correction”, which we believe is the key to understand the hierarchical learning in multi-layer neural networks. On the technical side, we show for regression and even for binary classification, for every input dimension d>0, there is a concept class consisting of degree ω(1) multi-variate polynomials so that, using ω(1)-layer neural networks as learners, SGD can learn any target function from this class in poly(d) time using poly(d) samples to any 1/poly(d) error, through learning to represent it as a composition of ω(1) layers of quadratic functions. In contrast, we present lower bounds stating that several non-hierarchical learners, including any kernel methods, neural tangent kernels, must suffer from dω(1) sample or time complexity to learn functions in this concept class even to any d−0.01 error.

Abstract: In recent years, neural networks have been extensively deployed for computer vision tasks, particularly visual classification problems, where new algorithms reported to achieve or even surpass the human performance. Recent studies have shown that they are all vulnerable to the attack of adversarial examples. Small and often imperceptible perturbations to the input images are sufficient to fool the most powerful neural networks. \emph{Advbox} is a toolbox to generate adversarial examples that fool neural networks in PaddlePaddle, PyTorch, Caffe2, MxNet, Keras, TensorFlow and it can benchmark the robustness of machine learning models. Compared to previous work, our platform supports black box attacks on Machine-Learning-as-a-service, as well as more attack scenarios, such as Face Recognition Attack, Stealth T-shirt, and Deepfake Face Detect. The code is licensed under the Apache 2.0 license and is openly available at https://github.com/advboxes/AdvBox.

Abstract: Large Transformer models routinely achieve state-of-the-art results on a number of tasks but training these models can be prohibitively costly, especially on long sequences. We introduce two techniques to improve the efficiency of Transformers. For one, we replace dot-product attention by one that uses locality-sensitive hashing, changing its complexity from O(L2) to O(LlogL), where L is the length of the sequence. Furthermore, we use reversible residual layers instead of the standard residuals, which allows storing activations only once in the training process instead of N times, where N is the number of layers. The resulting model, the Reformer, performs on par with Transformer models while being much more memory-efficient and much faster on long sequences.

Abstract: We present a method to edit a target portrait footage by taking a sequence of audio as input to synthesize a photo-realistic video. This method is unique because it is highly dynamic. It does not assume a person-specific rendering network yet capable of translating arbitrary source audio into arbitrary video output. Instead of learning a highly heterogeneous and nonlinear mapping from audio to the video directly, we first factorize each target video frame into orthogonal parameter spaces, i.e., expression, geometry, and pose, via monocular 3D face reconstruction. Next, a recurrent network is introduced to translate source audio into expression parameters that are primarily related to the audio content. The audio-translated expression parameters are then used to synthesize a photo-realistic human subject in each video frame, with the movement of the mouth regions precisely mapped to the source audio. The geometry and pose parameters of the target human portrait are retained, therefore preserving the context of the original video footage. Finally, we introduce a novel video rendering network and a dynamic programming method to construct a temporally coherent and photo-realistic video. Extensive experiments demonstrate the superiority of our method over existing approaches. Our method is end-to-end learnable and robust to voice variations in the source audio.

Abstract: This work introduces a new approach to localize anomalies in surveillance video. The main novelty is the idea of using a Siamese convolutional neural network (CNN) to learn a distance function between a pair of video patches (spatio-temporal regions of video). The learned distance function, which is not specific to the target video, is used to measure the distance between each video patch in the testing video and the video patches found in normal training video. If a testing video patch is not similar to any normal video patch then it must be anomalous. We compare our approach to previously published algorithms using 4 evaluation measures and 3 challenging target benchmark datasets. Experiments show that our approach either surpasses or performs comparably to current state-of-the-art methods.

Abstract: Image-based virtual try-on for fashion has gained considerable attention recently. The task requires trying on a clothing item on a target model image. An efficient framework for this is composed of two stages: (1) warping (transforming) the try-on cloth to align with the pose and shape of the target model, and (2) a texture transfer module to seamlessly integrate the warped try-on cloth onto the target model image. Existing methods suffer from artifacts and distortions in their try-on output. In this work, we present SieveNet, a framework for robust image-based virtual try-on. Firstly, we introduce a multi-stage coarse-to-fine warping network to better model fine-grained intricacies (while transforming the try-on cloth) and train it with a novel perceptual geometric matching loss. Next, we introduce a try-on cloth conditioned segmentation mask prior to improve the texture transfer network. Finally, we also introduce a dueling triplet loss strategy for training the texture translation network which further improves the quality of the generated try-on results. We present extensive qualitative and quantitative evaluations of each component of the proposed pipeline and show significant performance improvements against the current state-of-the-art method.

Abstract: The fate of scientific hypotheses often relies on the ability of a computational model to explain the data, quantified in modern statistical approaches by the likelihood function. The log-likelihood is the key element for parameter estimation and model evaluation. However, the log-likelihood of complex models in fields such as computational biology and neuroscience is often intractable to compute analytically or numerically. In those cases, researchers can often only estimate the log-likelihood by comparing observed data with synthetic observations generated by model simulations. Standard techniques to approximate the likelihood via simulation either use summary statistics of the data or are at risk of producing severe biases in the estimate. Here, we explore another method, inverse binomial sampling (IBS), which can estimate the log-likelihood of an entire data set efficiently and without bias. For each observation, IBS draws samples from the simulator model until one matches the observation. The log-likelihood estimate is then a function of the number of samples drawn. The variance of this estimator is uniformly bounded, achieves the minimum variance for an unbiased estimator, and we can compute calibrated estimates of the variance. We provide theoretical arguments in favor of IBS and an empirical assessment of the method for maximum-likelihood estimation with simulation-based models. As case studies, we take three model-fitting problems of increasing complexity from computational and cognitive neuroscience. In all problems, IBS generally produces lower error in the estimated parameters and maximum log-likelihood values than alternative sampling methods with the same average number of samples. Our results demonstrate the potential of IBS as a practical, robust, and easy to implement method for log-likelihood evaluation when exact techniques are not available.