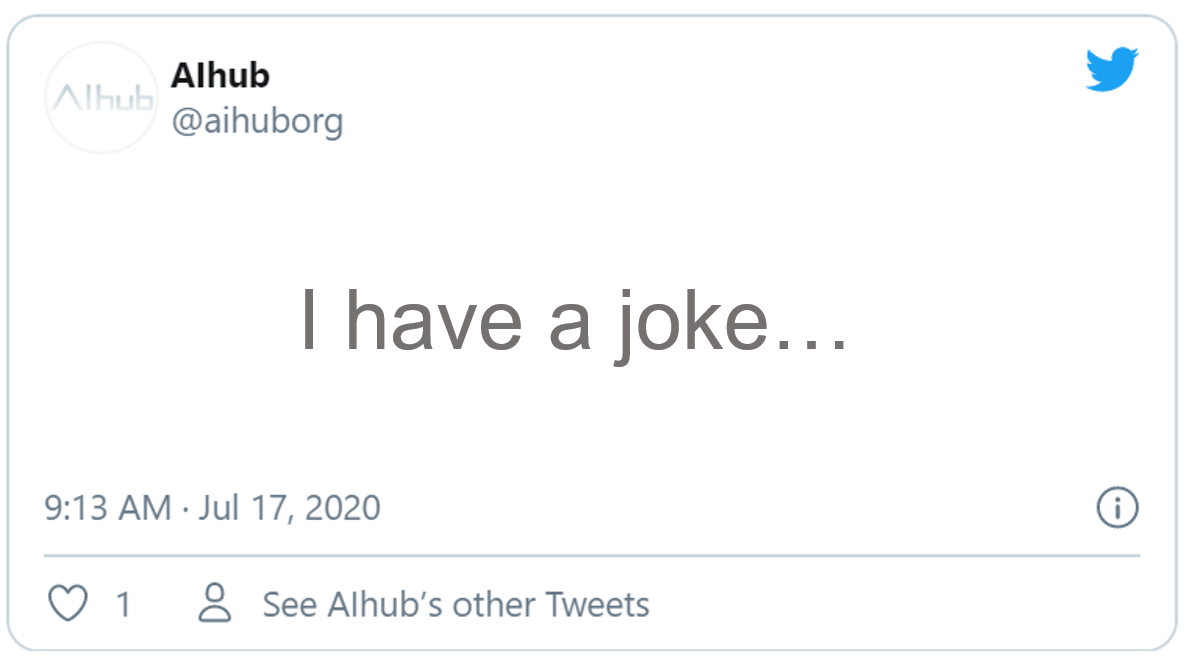 Twitter users will have seen the proliferation of “I have a joke” tweets in their feed over the past few days. The AI community produced some gems so we’ve collected a selection here for your amusement.

I have a reinforcement learning joke, but not sure it's rewarding. https://t.co/87vmPk79R5

I have a stochastic gradient descent joke but the punchline isn't on this saddle point https://t.co/B7GM2tmz5Z

I have a deep learning joke but it has a lot of layers to it. https://t.co/puRs6lqCUY

I have a machine learning joke but first can you show me like 200,000,000 jokes and tell me which ones were funny?

I have a swarm joke, but it’s still emerging.

I have a robotics joke but it only works in simulation

I have a joke about GPT-3 but you'll need to sign up for beta access to read it.

I have a Python joke, but I don't think this is the right environment.

I have an ML joke, but it's not about neural nets so it's not worth telling (nee teaching). https://t.co/695MNuoIx1

I have a language modeling joke, but it's too dangerous to be released. https://t.co/OdnrO6f7eg

I have a joke on determinism but not sure I should tell it.

I have a natural language processing joke, but we've only verified its effectiveness in English. https://t.co/yoHnD2z1r2

I have a computer vision joke, but its convoluted. https://t.co/V2osDDqvz4

I have a t-SNE joke, but its different every time I tell it.

I have a causal inference joke, but I think it assumes too much…

I have a joke about deploying AI in the real world, but it's not quite ready yet. https://t.co/DIup8p6J2M

We propose a method for using offline data to build a prediction model that only requires access to the available subset of confounders at prediction time.
07 May 2021, by ML@CMU

Peruse some of the chat from this week's International Conference on Learning Representations.
06 May 2021, by Lucy Smith

Hot papers on arXiv from the past month: April 2021

What’s hot on arXiv? Here are the most tweeted papers that were uploaded onto arXiv during April 2021.
05 May 2021, by Lucy Smith