Multi-agent interacting systems are prevalent in the world, from purely physical systems to complicated social dynamic systems. The interactions between entities / components can give rise to very complex behavior patterns at the level of both individuals and the multi-agent system as a whole. Since usually only the trajectories of individual entities are observed without any knowledge of the underlying interaction patterns, and there are usually multiple possible modalities for each agent with uncertainty, it is challenging to model their dynamics and forecast their future behaviors. 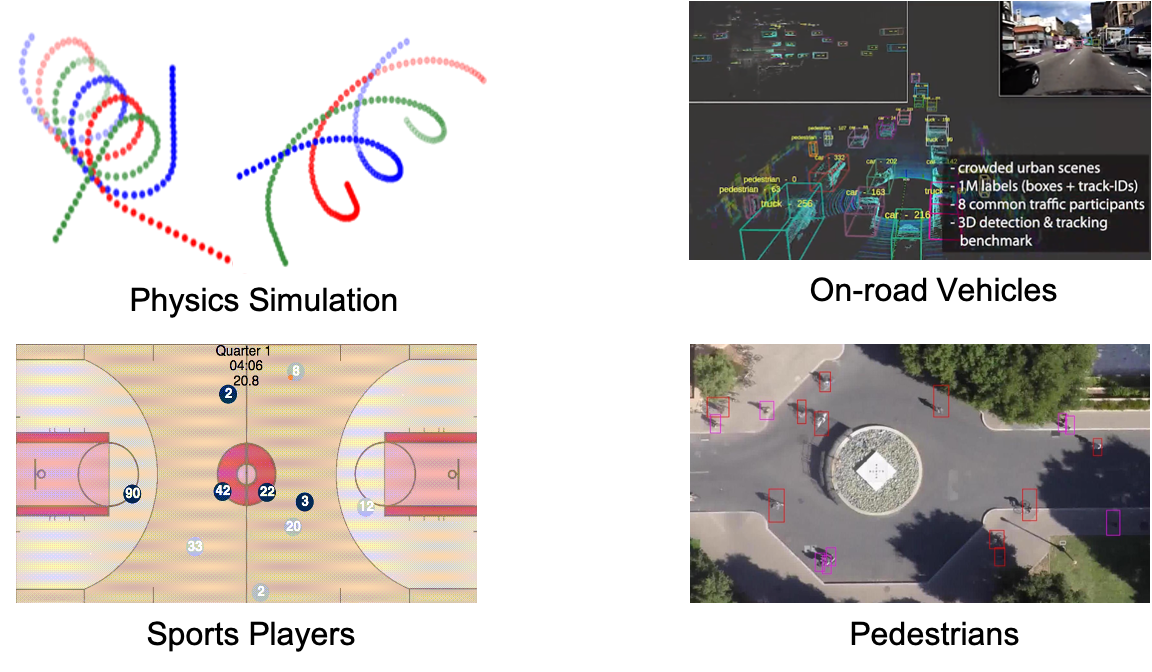 In many real-world applications (e.g. autonomous vehicles, mobile robots), an effective understanding of the situation and accurate trajectory prediction of interactive agents play a significant role in downstream tasks, such as decision making and planning. We introduce a generic trajectory forecasting framework (named EvolveGraph) with explicit relational structure recognition and prediction via latent interaction graphs among multiple heterogeneous, interactive agents. Considering the uncertainty of future behaviors, the model is designed to provide multi-modal prediction hypotheses. Since the underlying interactions may evolve even with abrupt changes over time, and different modalities of evolution may lead to different outcomes, we address the necessity of dynamic relational reasoning and adaptively evolving the interaction graphs.

Figure 2. An illustration of a typical urban intersection scenario.

We use an urban intersection scenario with multiple interacting traffic participants as an illustrative example to elaborate on the major challenges of the multi-agent behavior prediction task.

In this work, we took a step forward to handle these challenges and provided a generic framework for trajectory prediction with dynamic relational reasoning for multi-agent systems. More specifically, we address the problem of 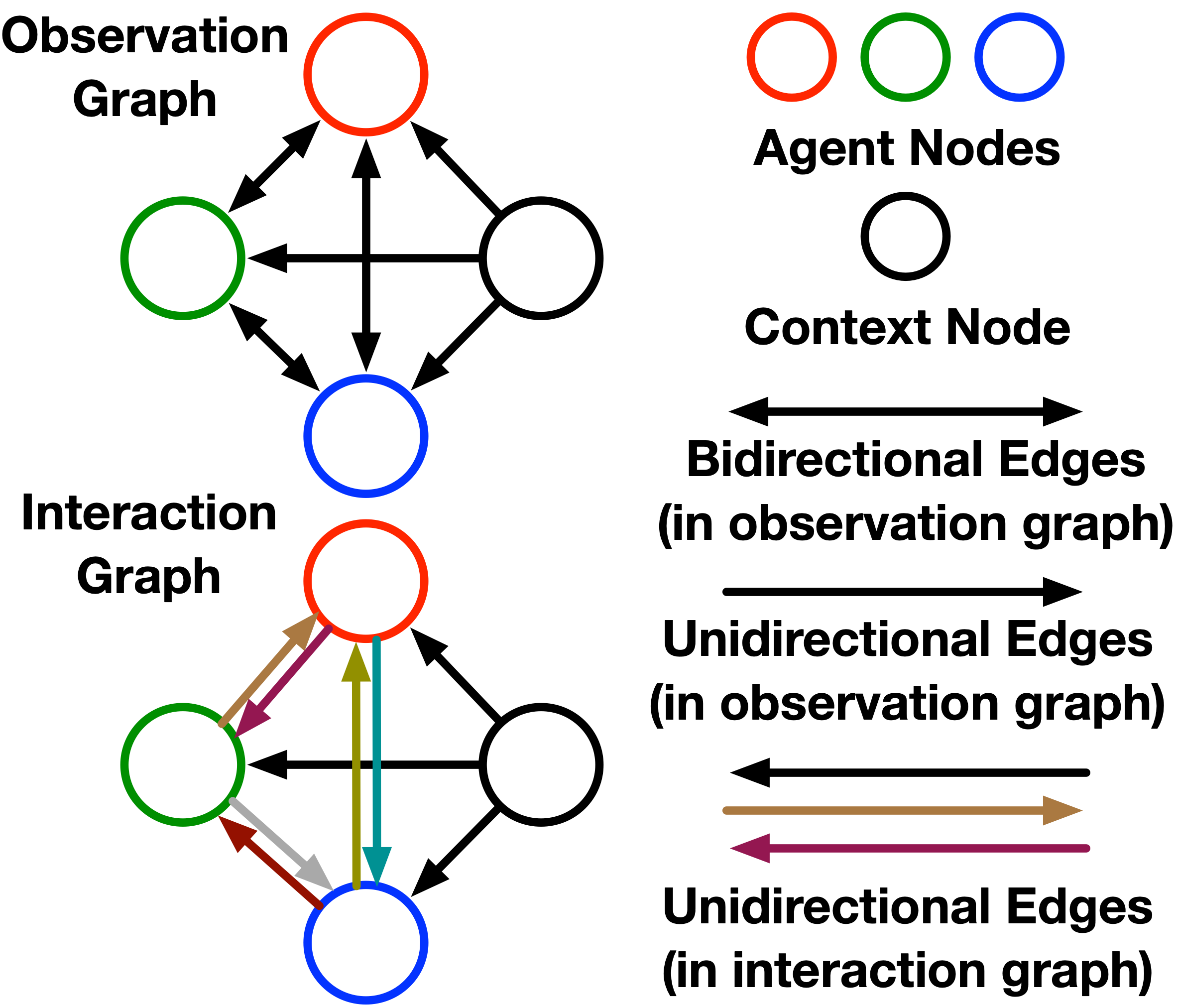 Figure 3. An illustration of the observation graph and interaction graph.

The multi-agent interacting system is naturally represented by a graph, where agents are considered as nodes and their relations are considered as edges. We have two types of graphs for different purposes, which are introduced below:

As illustrated in Figure 4, the encoding process is repeated every τ (re-encoding gap) time steps to obtain the latent interaction graph based on the latest observation graph. A recurrent unit (GRU) is utilized to maintain and propagate the history information, as well as to adjust the prior interaction graphs. More details can be found in our paper.

Here we emphasize the efforts to encourage diverse and multi-modal trajectory prediction and generation. In our framework, the uncertainty and multi-modality mainly come from three aspects:

We highlight the results of two case studies on a synthetic physics system and an urban driving scenario. More experimental details and case studies on pedestrians and sports players can be found in our paper.

We experimented with a simulated particle system with a change of relations. Multiple particles are initially linked and move together. The links disappear as long as a certain criterion on the particle state is satisfied and the particles move independently thereafter. The model is expected to learn the criterion by itself and perform both edge type prediction and trajectory prediction. Since the system is deterministic in nature, we do not consider multi-modality in this task.

We predicted the particle states at the future 50 time steps based on the observations of 20 time steps. We set two edge types in this task, which correspond to “with link” and “without link”. The results of edge type prediction are summarized in Table 1, which are averaged over 3 independent runs. “No Change” means the underlying interaction structure keeps the same in the whole horizon, while “Change” means the change of interaction patterns happens at some time. It shows that the supervised learning baseline, which directly trains the encoding functions with ground truth labels, performs the best in both setups and serves as a “gold standard”. Under the “No Change” setup, NRI (dynamic) is comparable to EvolveGraph (RNN re-encoding), while EvolveGraph (static) achieves the best performance. The reason is that the dynamic evolution of the interaction graph leads to higher flexibility but may result in larger uncertainty, which affects edge prediction in the systems with static relational structures. Under the “Change” setup, NRI (dynamic) re-evaluates the latent graph at every time step during the testing phase, but it is hard to capture the dependency between consecutive graphs, and the encoding functions may not be flexible enough to capture the evolution. EvolveGraph (RNN re-encoding) performs better since it considers the dependency of consecutive steps during the training phase, but it still captures the evolution only at the feature level instead of the graph level. EvolveGraph (dynamic) achieves significantly higher accuracy than the other baselines (except Supervised), due to the explicit evolution of interaction graphs. 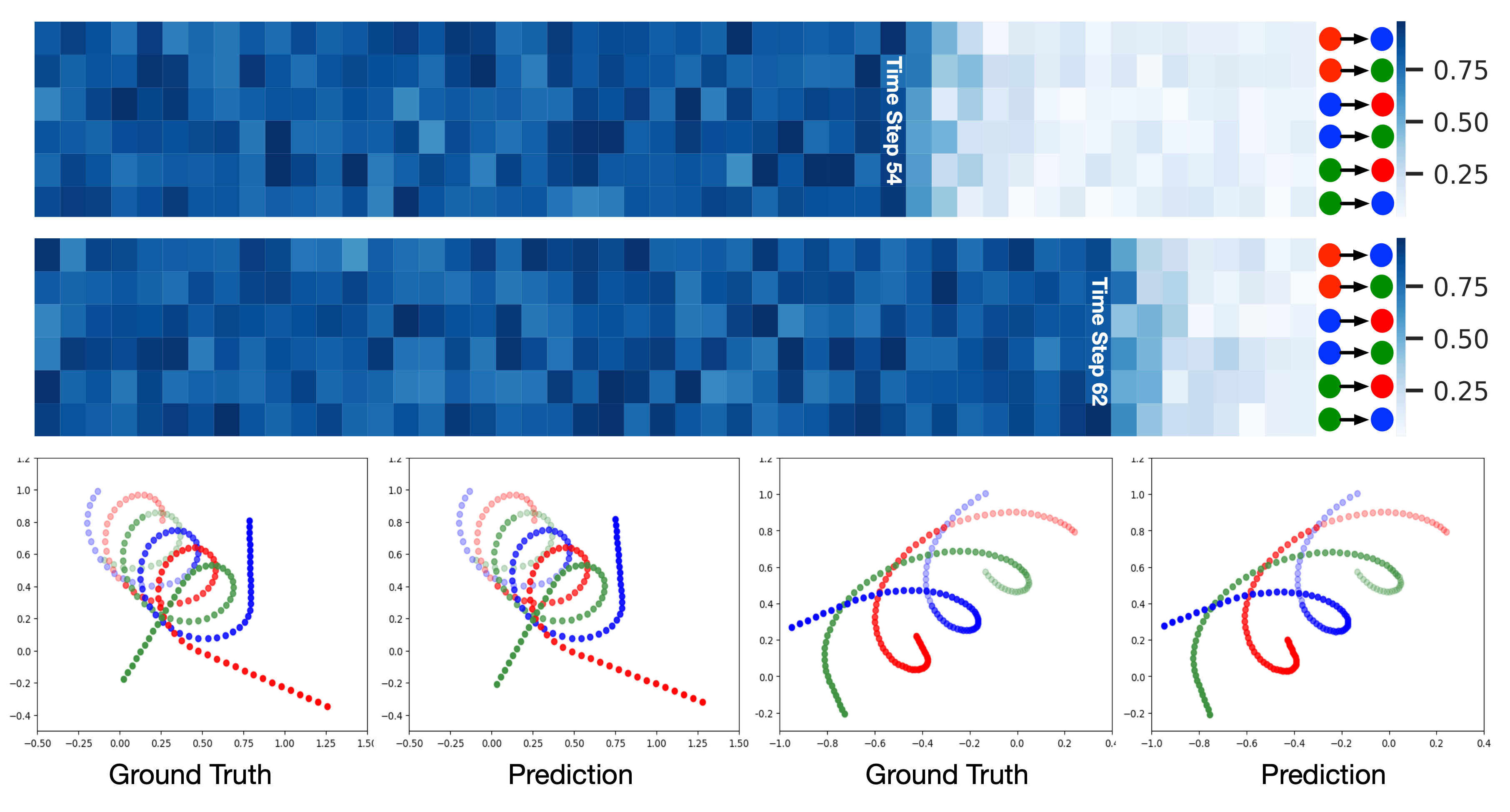 Figure 5. Visualization of latent interaction graph evolution and particle trajectories. (a) The top two figures show the probability of the first edge type (“with link”) at each time step. Each row corresponds to a certain edge (shown in the right). The actual times of graph evolution are 54 and 62, respectively. The model is able to capture the underlying criterion of relation change and further predict the change of edge types with nearly no delay. (b) The figures in the last row show trajectory prediction results, where semi-transparent dots are historical observations.

We predicted the future 10 time steps (4.0s) based on the historical 5 time steps (2.0s). The comparison of quantitative results is shown in Table 2, where the unit of reported

is meters in the world coordinates. All the baseline methods consider the relations and interactions among agents. The Social-Attention employs spatial attention mechanisms, while the Social-GAN demonstrates a deep generative model which learns the data distribution to generate human-like trajectories. The Gated-RN and Trajectron++ both leverage spatio-temporal information to involve relational reasoning, which leads to smaller prediction error. The NRI infers a latent interaction graph and learns the dynamics of agents, which achieves similar performance to Trajectron++. The STGAT and Social-STGCNN further take advantage of the graph neural network to extract relational features in the multi-agent setting. Our proposed method achieves the best performance, which implies the advantages of explicit interaction modeling via evolving interaction graphs. The 4.0s

are significantly reduced by 20.0% / 27.1% compared to the best baseline approach (STGAT).

The visualization of some testing cases is provided in Figure 6. Our framework can generate accurate and plausible trajectories. More specifically, in the top left case, for the blue prediction hypothesis at the left bottom, there is an abrupt change at the fifth prediction step. This is because the interaction graph evolved at this step. Moreover, in the heatmap, there are multiple possible trajectories starting from this point, which represent multiple potential modalities. These results show that the evolving interaction graph can reinforce the multi-modal property of our model since different samples of trajectories at the previous steps lead to different directions of graph evolution, which significantly influences the prediction afterwards. In the top right case, each car may leave the roundabout at any exit. Our model can successfully show the modalities of exiting the roundabout and staying in it. Moreover, if exiting the roundabout, the cars are predicted to exit on their right, which implies that the modalities predicted by our model are plausible and reasonable.

We introduce EvolveGraph, a generic trajectory prediction framework with dynamic relational reasoning, which can handle evolving interacting systems involving multiple heterogeneous, interactive agents. The proposed framework could be applied to a wide range of applications, from purely physical systems to complex social dynamics systems. In this blog, we demonstrate some illustrative applications to physics objects and traffic participants. The framework could also be applied to analyze and predict the evolution of larger interacting systems, such as complex physical systems with a large number of interacting components, social networks, and macroscopical traffic flows. Although there are existing works using graph neural networks to handle trajectory prediction tasks, here we emphasize the impact of using our framework to recognize and predict the evolution of the underlying relations. With accurate and reasonable relational structures, we can forecast or generate plausible system behaviors, which help much with optimal decision making or other downstream tasks.

Acknowledgements: We thank all the co-authors of the paper “EvolveGraph: Multi-Agent Trajectory Prediction with Dynamic Relational Reasoning” for their contributions and discussions in preparing this blog. The views and opinions expressed in this blog are solely of the authors.

This blog post is mainly based on the following paper:

Some other related works are listed as follows: