Alessandra Rossi is a member of both the technical and organising committees for the RoboCup Humanoid League. We spoke to her about the Humanoid League Virtual Season, which concluded with the grand final of the virtual soccer competition, and a three day workshop.

What was the motivation for starting the virtual RoboCup Humanoid league?

The Humanoid League Virtual Season (HLVS) has been driven by two main core motivations: firstly to allow teams to have support for continuous testing while making progresses and changes to their software, and secondly, to keep the teams connected throughout the year, thus strengthening the community and collaboration between teams.

We wanted to let teams use the longer periods between games, and the continuous games throughout the year to test novel approaches, with less risk, and to aid their success in the overall tournament. In addition, this way, teams can thoroughly analyse the collected data between games, and make informed decisions on how to improve and implement their approaches for the following match. From the discussions in past RoboCup competitions, we were aware that many teams were struggling to continuously progress and make time for RoboCup-related research during the year, especially during the pandemic when access to the lab facilities was limited. The Humanoid League Virtual Season provides an important opportunity for continuous and steady progress throughout the year, and also an opportunity to include new team members.

We believe that the Humanoid League Virtual Season might also help less experienced teams to gradually face the increasing scientific difficulties connected to the goal of RoboCup 2050. 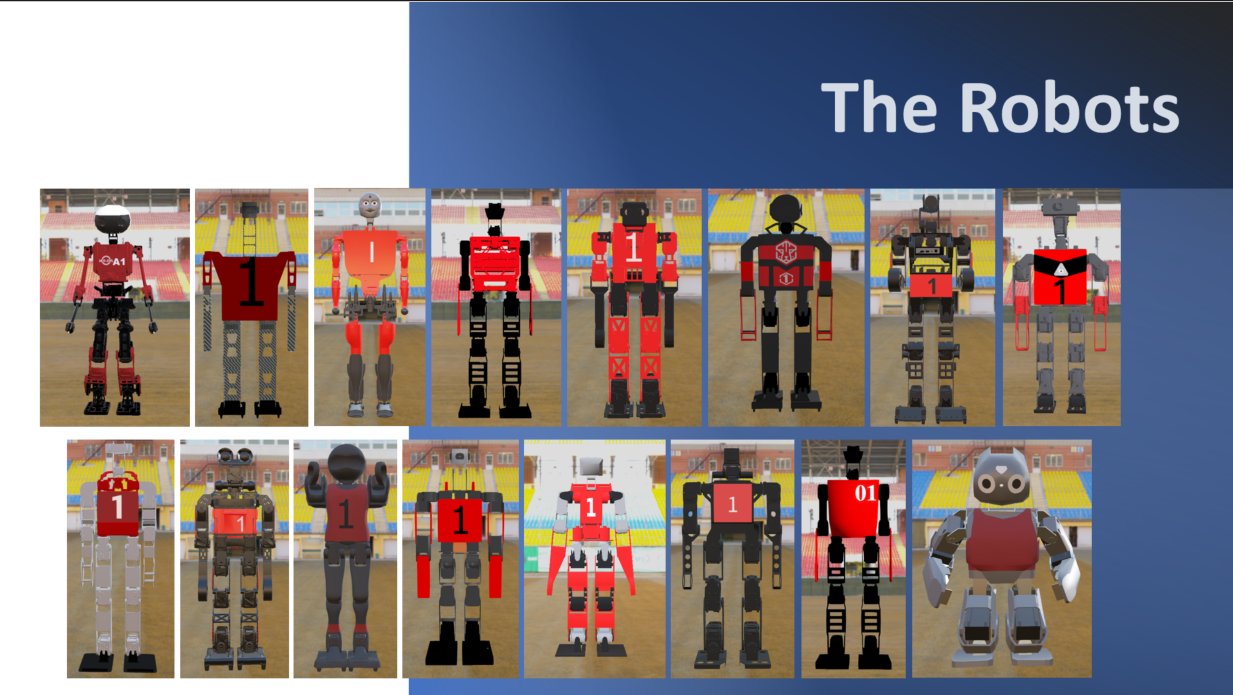 All of the robot models that played in the first version of the competition.

Could you tell us about the format and organisation of the virtual competition?

The Humanoid league Virtual Season competition took place over several months from December 2021 to April 2022. The games were played every two weeks.

The organisation was the following for each game week: by the Tuesday, teams could request to test any changes they implemented in preparation of the games; on the Thursday and Friday the Organising Committee ran the games in simulation according to the games’ schedules; on Sunday, the games were streamed for teams and the public. This streaming was alternatively scheduled in the morning and afternoon, which allowed those in different time zones to participate.

Eight teams registered for the competition, but after the fifth game day, one team withdrew from the tournament. In order to keep the competition fair, we kept the log files on the website, but did not count any game where this team was involved in for the final ranking.

Participating teams were from the following countries: Germany (two teams), Japan, Brazil, Iran, Australia, and Canada. They all shared their robot models, and have open source software. The winners were CIT Brains (Japan), with Hamburg Bit-Bots (Germany) finishing in second place, and 01. RFC Berlin (Germany) in third place. The statistics for these teams are: 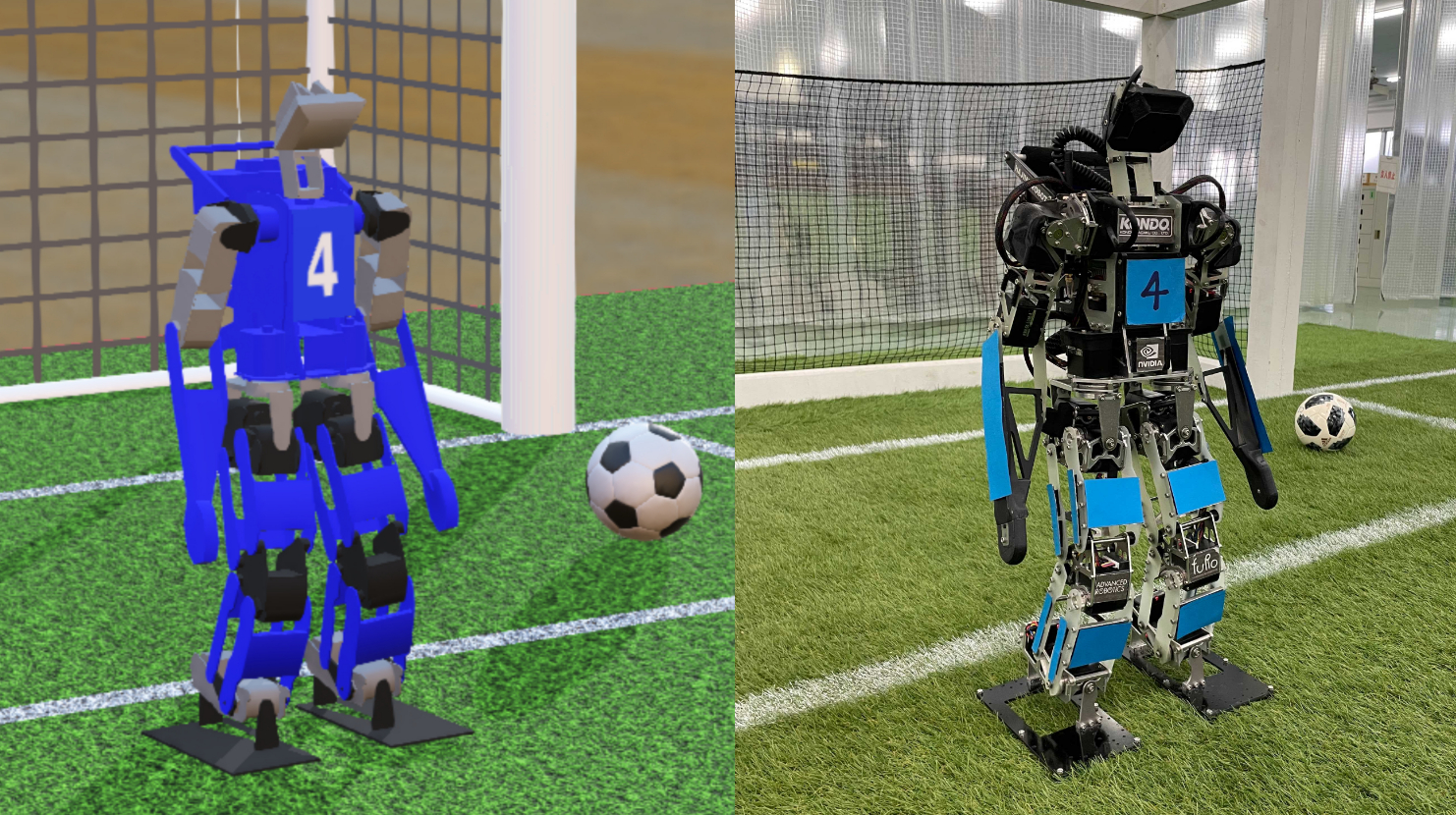 What are some of the improvements and innovations that have been made since last year, and throughout the competition this year?

At the end of last year, as a league, we decided that we did not want to have two different rule books for the physical and virtual competitions. Therefore, the first change was to implement the same rules for the Humanoid league Virtual Season tournament.

The improvements and innovations were made both before and throughout the competition. We wanted to make sure games were played according to more realistic physics, and this included changing light and environmental conditions. In particular, we introduced variations in the artificial light both in terms of direction and intensity, with the light source in different positions to simulate more natural light conditions in outside environments. Moreover, both the ball and stadium environment texture were altered between games so teams did not know in advance what they would look like. We also kept some fundamental characteristics. For example, artificial grass was a requirement for encouraging teams to work on more stable walking algorithms, backlash for actuators and realistic actuator torque.

We are also planning to include further challenges for next year’s games, both to incrementally increase the scientific challenge (e.g. uneven turf/terrain) and also to encourage the participation of other leagues, such as the soccer 3D simulation league (e.g. introducing technical challenges).

Could you tell us a bit about the workshop that took place at the end of April?

The virtual environment gives us the unique possibility to introduce domain randomisation beyond the possibilities in the real world, however the goal is also to encourage more robust scientific solutions that will be beneficial on the road to 2050. For this reason, we organised a three-days event called sim2real transfer.

During the event, we gave teams the opportunity to share their knowledge and experiences of applying realistic computational resources and scenarios to the virtual competition, and the other way around. A second aim was to have a specific roundtable to talk about possible ideas for collaboration between the 3d soccer simulation league and the Humanoid League.

Each team presented themselves, their software, and they discussed the challenges and the software and hardware development they undertook through the competition in response to the increasing difficulties of the games. RoboCup Executive Committee member of the 3D soccer simulation league Marco Simões was an invited speaker, and he joined us with several members of the 3D simulation league in an active and inspiring round table for learning from each other, and discussing about possible collaborations.
We also had several workshops organised by the teams to share their experience and knowledge, and organisers showed us the “behind the scenes”, how to run games with our automatic referee, game controller and Amazon Web Services.

Finally, we concluded the event with a discussion on the strengths, weaknesses and further opportunities of the Humanoid League Virtual Season.

Last year there was talk of a collaboration with the 3d simulation league. How do the two leagues plan to work together?

The sim2real transfer event was a great opportunity for the Humanoid and 3D simulation (3DSSIM) leagues to come together, share our common objectives and possible ways to collaborate. One of the main common goals between the two leagues is to be like a transfer between the simulation and physical RoboCup.

In particular, the two leagues are planning to find some common ground to enhance the simulation to meets the requirements of both. Several ideas were also proposed to help each other to improve our capabilities. For example, some improvements were suggested for fairly detecting and evaluating fouls during the games. Another possibility was to test the automatic referee systems on each other games.

A possibility to favour an incremental participation of 3DSSIM could be to include technical challenges in the Humanoid League Virtual Season, taking inspiration from those used in 3DSSIM and in physical humanoid league technical challenges, and drop-in games to increase collaboration between teams.

Looking ahead to RoboCup in July, what are the plans for the virtual RoboCup Humanoid league in that competition?

We have not planned a particular role for the Humanoid League Virtual Season during the physical competition in Bangkok, Thailand. However, we are looking forward to some exciting new games, and see how teams have transferred back their software from the virtual to the physical competitions. Inspired also by the teams’ progress for vision during Humanoid League Virtual Season, this year we will use different FIFA balls for both adult and kid size games.

We look forward to organising the Humanoid League Virtual Season next year with more scientific challenges and innovations. 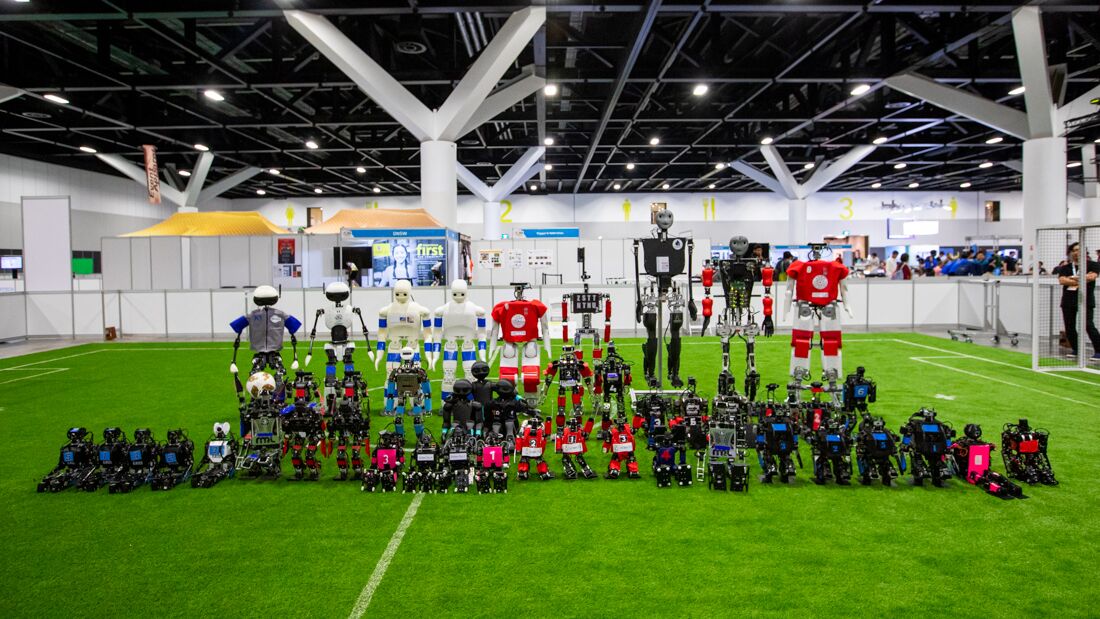