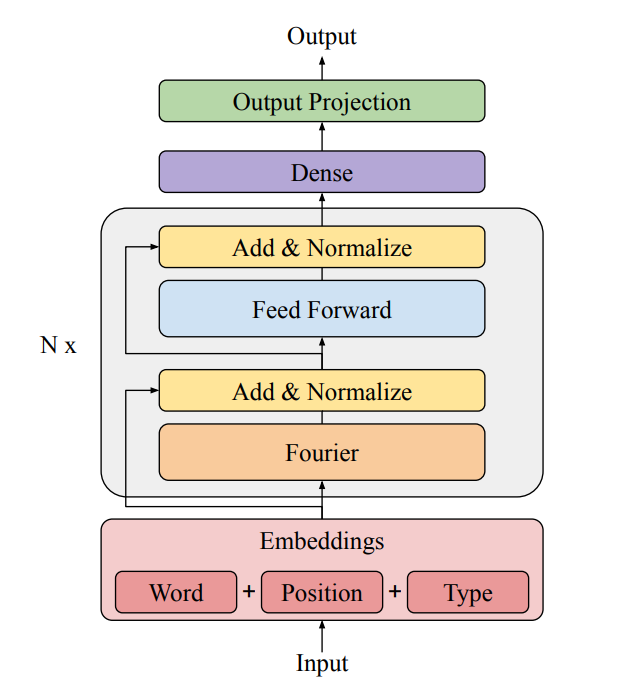 James Lee-Thorp, Joshua Ainslie, Ilya Eckstein and Santiago Ontañón won the best efficient NLP paper award at NAACL 2022 for their paper FNet: Mixing Tokens with Fourier Transforms. Here, the authors tell us about how they are working to improve the efficiency of large language models.

In our paper, we study faster transformer models. Transformers have proven remarkably successful at modeling everything from language to protein structures. We replace the computationally expensive self-attention layers in transformer encoders with faster, linear transformations. In the FNet model, we are essentially replacing self-attention with discrete Fourier transforms. This relatively simple substitution turns out to be quite effective.

Beyond the practical efficiency advantages of FNet, we make a few particularly exciting observations in our paper:

We started from the premise that the attention transformation in a transformer is really a mechanism for “mixing” tokens. That is, the attention layer combines inputs with relevance weighted coefficients in a basis of the original inputs. We asked if other transformations, and in particular faster, linear transformations, might serve a similar purpose by mixing inputs in a different basis, such as the Fourier basis.

We tested a number of different mixing replacements in BERT, and compared their performance in a classic NLP transfer learning setting: masked language modeling pre-training on a large corpus followed by fine-tuning on the GLUE suite of benchmarks.

We found that while the linear mixing transformations showed some limited quality degradations relative to BERT, they were generally much faster. FNet, which uses Fourier transforms to mix tokens, turned out to be particularly efficient. For typical input sizes, FNet achieves 92% of BERT’s accuracy on GLUE, but runs up to 80% faster. For longer input sizes, FNet performs even better: it is faster than all of the efficient transformer variants evaluated on the original Long Range Arena (a long input benchmark).

We want to close the quality gap with BERT, while maintaining the speed-ups of FNet. To this end, we are currently exploring combining mixing transformations with sparsity.

We also plan to look beyond encoder / BERT-style models. Can FNet and its mixing cousins be adapted to T5 encoder-decoder models and GPT style decoder-only models?

Finally, we only explored a limited number of mixing transformations. FNet gains its computational speed in part from the efficiency of the fast Fourier transform. We’d like to see if we can find other optimized transformations that could power different components of these models.

This paper is dedicated to our colleague and co-author Ilya Eckstein, who passed away after the paper was written but before it was presented at NAACL. Ilya was a dear friend and a fierce advocate of this project and general out-of-the-box thinking. We miss him terribly.