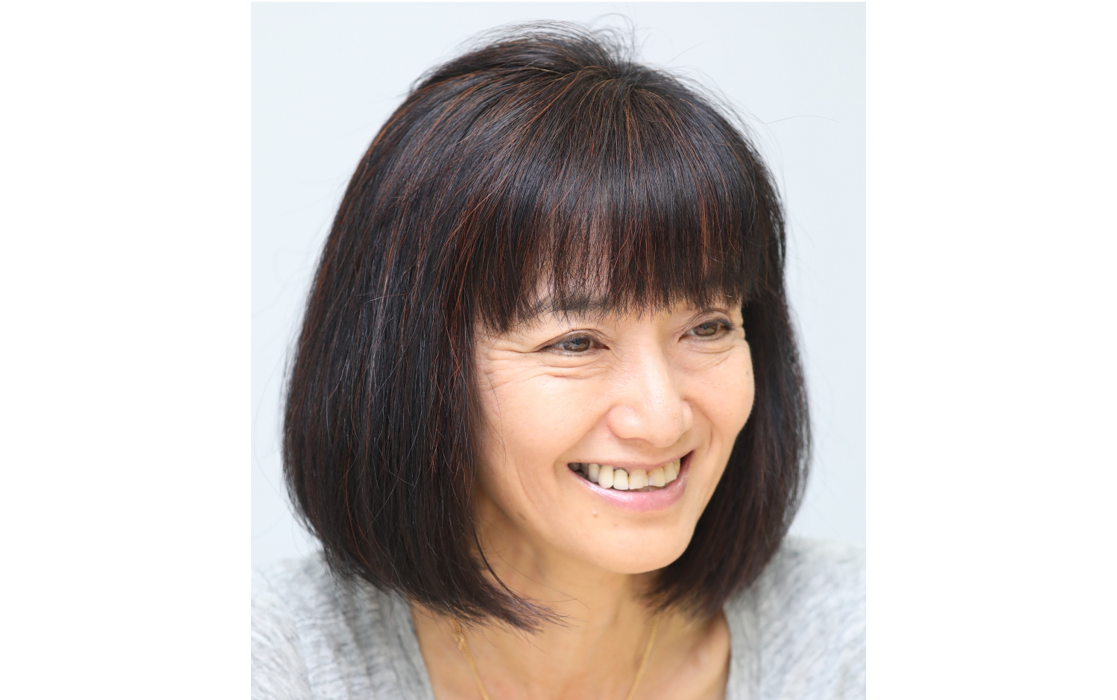 RoboCupJunior (RCJ) is designed to introduce RoboCup to school children, with the focus being on education. RCJ offers several challenges, each emphasizing cooperation and problem-solving. This initiative provides an exciting introduction to the field of AI and robotics.

There are three sub-leagues within RCJ:

Following the conclusion of this year’s RoboCup, we spoke to trustee Amy Eguchi about RCJ and how the events went in this virtual edition. Amy has been involved with RCJ since 2000 and, in that time, has seen the number of participating teams grow from around 30 to 200.

How did the RoboCupJunior competition go this year?

It went amazingly well, which was impressive. The people I’ve spoken to said it was a great event. Kids are so used to being online now because of the pandemic, and that meant that they had already learned how to navigate the different communication tools. The participants loved Gathertown, which was basically our competition venue, where we had a room for each league. Within the rooms there were different team sections, where you could watch a presentation from the team or see a poster or paper about their work.

We had a workshop on the final day of RoboCup (Monday 28 July); this worked alongside the symposium that the RoboCup major leagues run. In the workshop the teams presented and articulated their learning experience. The teams really felt that this year’s event was organised well, so that was nice to hear.

Usually during the RoboCup week we don’t get much sleep, due to the intensity of organising the event. It was the same this year; one of our committee members went for 26 hours without sleep!

RCJ Soccer using GatherTown, and one of the Rescue league presentations.

What challenges did you face this year with the event in a virtual format?

When it’s a regular year, as organisers, we know what the teams have been up to, we know that they have robots, and that they can work together. This year, that was information that we didn’t have. We didn’t know which teams were active and what they were capable of doing. We also didn’t know if they would be in the same room together during the competition or if they would be distributed.

That was the hardest part when deciding the competition structure. For example, with the rescue competition, we have a rescue arena that we put the robots in, and then the robots get points for rescuing victims and navigating the arena. There are different obstacles for them to identify and to avoid. In the virtual set-up we didn’t know what kind of space they had available to them.

We needed to ensure that there was something we could assess overall. We also needed to be flexible so that we didn’t impose something that the teams couldn’t do. Some of our committee members are teachers too so they were able to advise on what the kids were capable of doing. It was a similar challenge for the soccer league – we needed to know what size fields the teams had available. 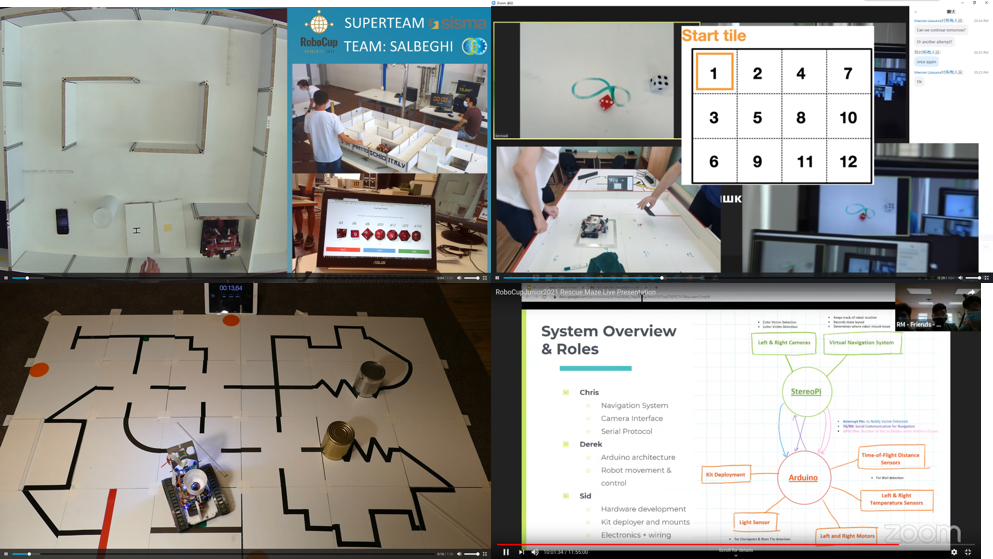 Action from the RCJ rescue league.

What changes did you make this year?

Soccer decided to add a simulation component this year – so that’s brand new. As it’s the first time we’ve done a simulation we learnt a lot. Rescue already had a simulation competition but we introduced a new simulation platform for that. Overall, we found that the kids loved it. Many of them were asking if we were going to continue with the simulation element next year. That’s something we’ll be discussing within our committee shortly.

As well as the simulation elements, we also had some physical robot challenges.

One other difference was that the online nature of competition made teams’ accomplishments more visible. Usually, when the teams present their robots this is a closed interview. However, this year, due to the online nature, we had to shift the assessment from looking at the robot to really understanding what the kids did.

Across the three leagues we required everybody to submit a kind of team description paper. They also needed to provide a log book that captured their progress. In addition, we asked for a presentation video, where they described the different components of their work. We learnt a lot from those presentations.

The most rewarding thing was that the teams also felt that they learnt more this year, and that was really interesting to hear.

The task for us as organisers is to work out how we can maintain the learning opportunity that the teams had this year. RoboCup is a competition but it’s really about the community getting together to learn from each other. That happens naturally in the major leagues because they have a research focus. If you have something new to present you don’t hide that from other teams for the sake of winning next year. In the Juniors they tend to focus more on winning than sharing. If they have a really interesting, innovative idea, they usually don’t want to share that with other teams. That has been a challenge, and this year, due to the virtual nature of the event, we made them share. I hope we can embrace this cultural shift moving forward.

This year’s shift will hopefully make the team members and teachers realise how important it is to share. They can help other teams learn. To me that was a big take-away and accomplishment, and is thanks to all the committee members. 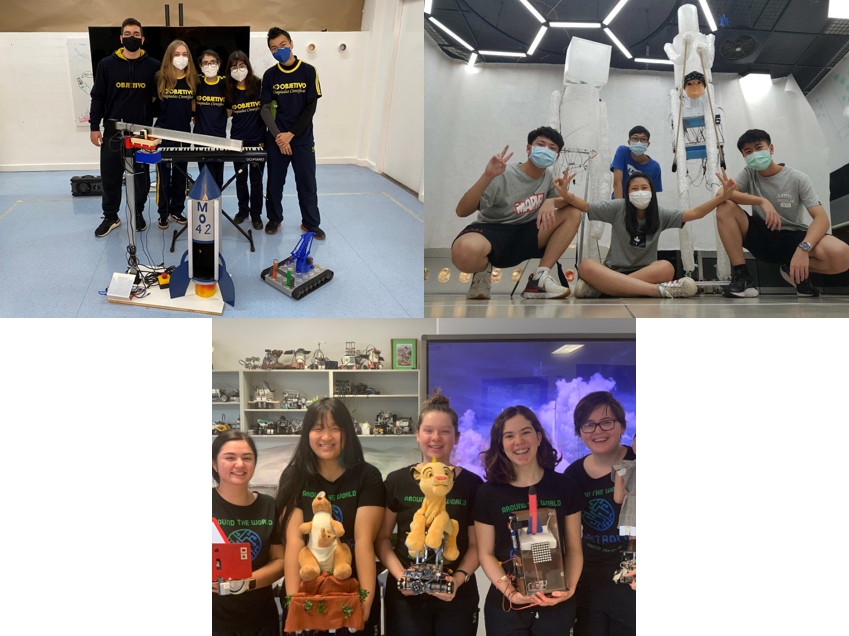 Three of the RCJ OnStage teams.

What are the future plans for the league?

At the moment, there is nothing that fills the gap between the Junior and major RoboCup leagues. Undergraduate students usually don’t get into the major league teams as they generally tend to be more for graduate students. We want to give them an opportunity to keep learning so that, eventually, they get into the major league, or start their own major league team. We are trying to put something in place to support these students, as well as advanced high school students.

There are two initiatives already happening. One is in conjunction with the Rescue league. Rescue has a challenge called the Rapidly Manufactured Robot Challenge (RMRC), where the robots are made with a 3d printer and cheap motors and wheels. The responders need a cheap but powerful small robot to deploy, something that they can leave on-site if necessary. This is a perfect challenge for students. After the competition everything becomes open source, and they have to keep communicating throughout the rest of the year, which is what the main Rescue league does.

Another challenge is with the @Home community. We have an @Home Education event, which is more like a hackathon and runs for three or four days. Teams come on the first day, perhaps without a robot, and we let them use the robots we have, we run the workshop, and the kids learn what to do. They have to learn the vision, the navigation, and the manipulation aspects. It’s really high level. By the end of the week you can actually see the robots moving.

At the end of the workshop all of the robots demonstrate their “follow-me”. The robots line up, then the first robot follows a human, then all the other robots follow each other. Seeing that happen is so rewarding.

What we are trying to do is to help teams get started. After that they gradually improve every year and can eventually start to think about participating in the major league @Home or the Rescue competitions.