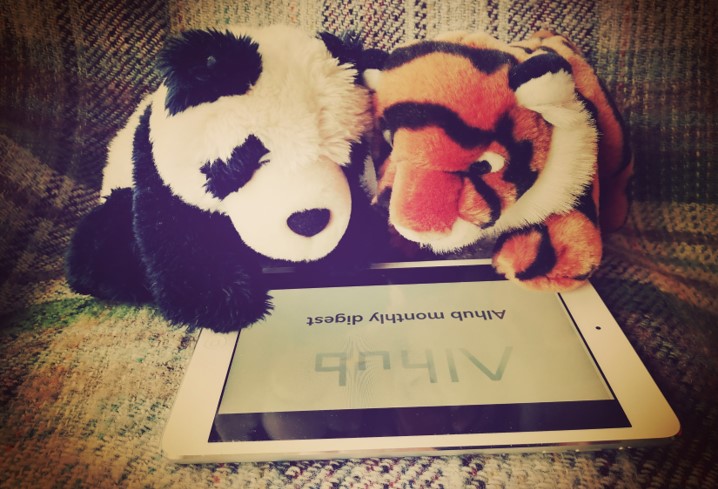 Welcome to our July 2021 monthly digest where you can catch up with any AIhub stories you may have missed, get the low-down on recent events, and much more. In this edition we cover ICML 2021, celebrate award winners, check out new AI reports and strategies, and find out who won the AI Song Contest.

This month saw the running of the thirty eighth International Conference on Machine Learning (ICML). There were a huge variety of events, including talks, workshops, tutorial, and socials. We were in (virtual) attendance and managed to catch all of the invited talks. You can read our summaries of the five presentations in these two articles:
#ICML2021 invited talk round-up 1: drug discovery and cryospheric science, featuring the talks by Daphne Koller and Xiao Cunde.
#ICML2021 invited talk round-up 2: randomized controlled trials, encoding speech, and molecular science, featuring the talks by Esther Duflo, Edward Chang and Cecilia Clementi.

Also, find out what the attendees were getting up to in our tweet round-up of the conference.

You will no doubt remember the buzz surrounding news last November that DeepMind had achieved a significant increase in accuracy for 3D protein structure prediction using their new version of AlphaFold. Well, on 22 July, more exciting news came in the form of a protein structure database, which is completely free and open for anyone to investigate. The collaboration between DeepMind and the European Molecular Biology Laboratory (EMBL) so far details over 350,000 proteins from the human proteome, and 20 other biologically significant organisms. You can check it out here.

Regular digest readers will know that we’ve been eagerly following this year’s AI Song Contest. Last month the songs were released to the public, and on July 6 the winner was announced. The accolade went to M.O.G.I.I.7.E.D., with their song Listen to Your Body Choir. You can read more about it here. Also, check out our post about last year’s competition, which includes some more details about the different AI models that some of the teams used to compose their entries.

To accompany their announcement, which was delivered in true Eurovision style, the organisers laid on a programme of events all on the theme of music and AI. You can watch them in retrospect, including the opening keynote about interactive generative models for music.

Who reports on AI? WHO do

The World Health Organisation (WHO) have issued a report on Artificial Intelligence in health and six guiding principles for its design and use. This guidance document is based on the collective views of a WHO Expert Group on Ethics and Governance of AI for Health, which comprised 20 experts in public health, medicine, law, human rights, technology and ethics. Read WHO’s news item here.

In May, CLAIRE (the Confederation of Laboratories for Artificial Intelligence Research in Europe) revealed the news that they were opening four new offices. Each CLAIRE Office has its own focus in supporting work on current topics around European and human-centred AI research, AI for good and AI for all. Following a virtual launch roadshow, the offices are now officially open. You can watch all of the launch events on YouTube: Zürich | Oslo | Paris | Brussels

We recently announced the next topic in our series of focus issues on the UN sustainable development goals. Over the next month or so we’ll be bringing you a selection of articles on the use of machine learning in the area of affordable and clean energy, which is goal number seven in the UN list. There is still time to contribute if you are interested. Just drop us an email here.

It was a bumper month for awards, with ACM SIGAI, IJCAI and ICML all announcing the recipients of some of their major gongs.

ACM SIGAI industry award
The ACM SIGAI Industry Award for Excellence in Artificial Intelligence is given annually to individuals or teams who have transferred original academic research into AI applications in recent years in ways that demonstrate the power of AI techniques. The winner of the 2021 award is DrAid, an intelligent assistant for radiologists developed by VinBrain, Vietnam. DrAid assists in the interpretation of chest x-rays for diagnosis of clinical syndromes, and the end-to-end support of clinical management tasks.

IJCAI awards
Four IJACI awards were announced this month. We wrote about three of these, the Award for Research Excellence, the John McCarthy Award and the Computers and Thought Award, here. The winners were Richard Sutton, Fei Fang and Tuomas Sandholm respectively. IJCAI since announced one further award, the Donald E. Walker Distinguished Service Award, which was collected by Steven Minton.

Carme Torras wins National Spanish award
You may remember that we’ve covered some of Carme Torras’ work in the past. It was good news for her this month as she pocketed a prestigious national Spanish award (Premi Nacional de Recerca) in recognition of her continued excellence in the field of artificial intelligence and assistance robots.

Computing Up is a podcast on all things computational from Michael Littman and Dave Ackley. This month, Michael and Dave talk to George Konidaris, assistant professor and director of the Intelligent Robot Lab at Brown University, about building generally intelligent robots, and the importance of both embodiment and abstraction in artificial intelligence.